It’s the second week of June. Almost time for the monsoon to hit Bengal. As I sit ensconced in my small University town of Santiniketan, nestled in the district of Birbhum,it seems the land is waiting with bated breadth for the cool rains to soak and soothe it.

This morning it was rather sultry. Humidity high,the matured radhachura in the garden , shimmering in golden florets seemed to be playing my favourite childhood game of”statue”.Standing still. Not a single leaf movement,not a floret shaking…silent,steady,stiff. The kids playing would shout ,”statue” and one had to stand still…till someone shouted,”ease”. The air seemed ominous,no breeze at all.. I moved in with my morning tea near the kitchen shed to check if the papaya had ripened for the breakfast table. To check if the maturing sun had filled the ,”fruit with ripeness to the core .”Well it was ripe for sure and was already the breakfast for the large cuckoo. I watched him deftly perched atop the stem of the fruit, scooping the juicy ,orange pulp in its beak. Cocking it’s head with crimson bead of an eye to ward off the waiting bulbul,Indian babblers and the most docile dove. All hopping around the mango,lemon and woodapple tree. Pretending to ignore the masterful bird. I spied quietly. But the babblers,commonly known as the “seven sisters”,a set of raucous,unruly birds are by nature fighters. The toughest of the group sharply darted at the fruit ignoring the cuckoo who swiftly flapped it’s large black wing and almost in manly fashion overpowered it! The babbler on the ground,the cuckoo on top,it’s beak and claws had pinned the babbler down.

I could sense the grounded smaller bird’s suffocation….could as if hear it scream silently,”I can’t breathe…”Just like that gentle,matriarch, fifteen year old ,pregnant elephant had . It had consumed coconut filled with firecrackers,which exploded in her mouth in the Silent Valley forest. She died a week later in the Velliyar River on 27th May. She had not harmed anyone even in her deepest pain..had walked into the river to cool her burning gut. But I know she was groaning to herself ,”I can’t breathe…”Just as that tall ,tough man two days ago in Minneapolis, Minnesota had groaned.Allegedly accosted by the police for using a counterfeit 20 dollar bill. It wasn’t the lawmakers reprimand,it was sheer inhuman brutality. Yes,George Floyd is gone voicing,”I can’t breathe..”We have a song in his name now.

The death of an elephant in Kerala ,India or the death of a man with different pigmentation is nothing but symptomatic of a wider malaise. Malaise of conflict. Man-animal conflict,man to man conflict.Unending discrimination ,inhuman supremacy of the seemingly tougher on the weaker.

The morning turned painful,the papaya tree stood baring its half eaten fruit gaping wide with the orange inside turning crimson in my eyes like a festering wound….I can’t breathe…George Floyd I knew you not but I can’t breathe,brother I can’t breathe too. 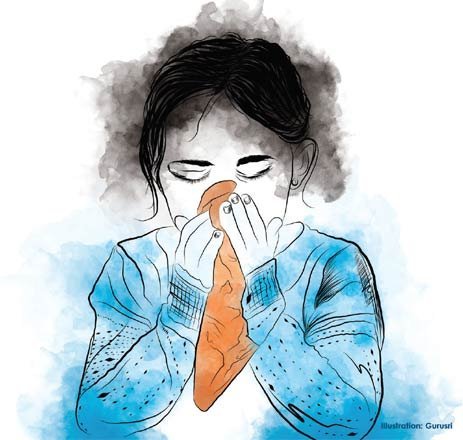