A dozen odd journalists from mainstream Pakistani news papers were flown from Karachi to Dhaka to get a first hand experience of the Pakistani Army’s Operation Searchlight, aimed to curb the Bengali rebellion in East Pakistan.

Mostly, the journalists where shown what the Army wanted them to see and report. They were given handouts to reproduce in their respective publications.

Most of the journalists did exactly that.
One did not.
His name was Anthony Mascarenhas, the assistant editor of THE MORNING NEWS , Karachi.

He hailed from the micro-minority community of Konkani speaking Goan Catholics of Karachi. Anthony was born in Belgaum, Karnataka in British India and his parents had settled in Karachi where they continued to stay as Pakistanis after partition.

Anthony had a solid reputation of being a honest, hard nosed Pakistani journalist. He was married to Pakistani Goan catholic girl Yvonne from Karachi only and they had five children.

Anthony, post the 10 day visit to East Pakistan, was in a state of shock. He had seen a genocide .
Allegedly 3 million East Pakistanis had been massacred in couple of months. Thousands of women had been raped. He wrote it all.

He wrote about how the Pak Army used this opportunity to annihilate substantial portions of the the Hindu population of East Pakistan along with Muslim Bengalis who wanted to break away from Pakistan and have their own Bangladesh..He also wrote about the brutalities committed by the Mukti Bahini on the Bihari Muslims for having sided with West Pakistan and the Pak Army.

He wrote truthfully and fearlessly. But his bosses chickened out. They refused to carry the story. Almost all Pakistani newspapers refused. Anthony came on the radar of the ISI and they started hounding him.

In a very dramatic manner, he escaped Karachi citing a need to visit London to be with his ailing sister Ann. He landed in London in the first week of June 1971 and from the airport straight went to the office of The Sunday Times.

The Sunday Times agreed to carry the story. But before that his family had to be gotten out of Karachi, as there were bound to be consequences of the article on his family. A coded message was sent home via telegram that said, “Ann’s operation was successful” Which was a signal to pack bags and be ready to flee.

To avoid the suspicion of the ISI, Anthony returned to Karachi. His family was all packed and ready. Discreetly he had to take them to Karachi Airport and bundle them off to London. But he himself couldn’t take that flight. There was a rule in Pakistan those days, that a person could travel abroad by flight no more than once a year. So Anthony had to hoodwink the ISI on his trail and cross the border by road to Afghanistan. He took a flight to London from Kabul.

On June 13th 1971, after his family and he both had reached London safely, the story was published in The Sunday Times. It was a two full page article called GENOCIDE.
Foreign journalists so far, had been barred from entering East Pakistan during the genocide. This was the first time ever, that the world was getting to know about what actually was happening in that part of the world. Hell broke loose as the story broke.

World leaders and organizations took notice and censured Pakistan for the most inhuman acts. Indira Gandhi, facing an refugee influx of 1 crore people from East Pakistan, has gone on record saying that this article was like a nail in the coffin that made her decide to intervene militarily.
Rest is history.

Mascarenhas and his family never returned to Pakistan. He died in London 1986. He wrote two books:
1. The Rape of Bangladesh
2. Bangladesh- A legacy of Blood

This man is a hero of humanity and integrity. 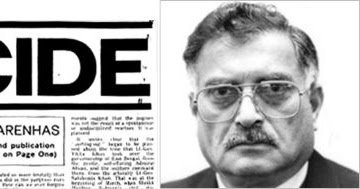